I’m starting this series on specific jobs in the army, with some support jobs.
The most “in the know” job in the Army is Human Resource Specialist, MOS (Military Occupational Specialty) 42A in the Adjutant Generals Corps. It is physically one of the easiest jobs in the Army. It is a solid desk job, and is continually rated high by the people doing it. The big jobs website “Glassdoor” has workers rate companies on a scale of 1 to 10, and they have workers rate how they like their job on a scale of 1 to 5. In 2015, Glassdoor surveyed soldiers to have them rate their jobs. The top rated job in the Army, by people doing it was Human Resource Specialist, 42A’s gave their job a 4.3 out of five rating.

Sergeant Isabel Giron a 42A at the Joint Multinational Readiness Center, Hohenfels, Germany

They qualify with their rifle, go through the gas chamber, and take a PT test once a year, and they do PT (Physical Training) every weekday morning just like every other soldier, but their working day is behind that desk and computer. If they go to the field whether they are in a tent or a mobile shelter, they are behind a desk and a computer. If they deploy they rarely go outside the wire, because their job is behind a desk and a computer. 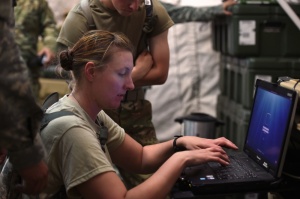 If they are airborne they will probably jump once every three months, to keep up jump pay. Promotions are in line with most support jobs, and they are the ultimate POG’s (Person Other than Grunt), but they do get a lot of satisfaction in performing their work, because their job is taking care of soldiers. Every personnel action that affects a soldier is handled by a Human Resource Specialist, including awards, promotions, schools, and assignments. HR Specialists know more about assignments, advanced schools, and promotions than any other soldier, because that is their job, from battalion to the Human Resource Command at Fort Knox, Kentucky, where there are a gazillion HR Specialists determining all soldiers’ assignments.
In answer to a question from a future enlistee considering 42A, one 42A said this; “You will be at your desk for majority of your time. You network a lot being a 42A, whether it’s in your own battalion or around your brigade. If you learn your job, news will travel fast and you will get the respect of guys in your unit. That goes from the joes on the line to the CSM (Command Sergeant Major). Day to day, it’s not bad. You stay busy and learn a great deal about the Army. Of course you’ll have crappy days, but what job doesn’t have those? One piece of advice that I’ll share with a future 42A – No matter what you’re working on, take care of the Soldiers and treat their paperwork as your own. To you, it’ll just be another action, promotion, leave form or whatever. It’s just another piece of paper in your stack of stuff to do for the day, but that piece of paper might be the whole world to the Soldier at the time. That promotion they’ve been waiting on for months, the leave form to fly home to see their family or the packet to get their family overseas with them. Complete your mission so these guys can focus on their mission.”

Specialist Travis Campbell a 42A in a battalion S-1 office at Fort Carson, Colorado likes knowing what he does everyday makes a difference for individuals or for the organization.

MOS 42A Human Resource Specialist encompasses a large area. The Army used to have an MOS for Personnel Specialist, one for Administrative Specialist, and one for Postal Specialist. They were all consolidated into 42A. To be qualified to work in an actual Army Post Office, there is an additional five week school after AIT, for those who want to go that route. MOS 42A requires a Secret Security Clearance, you will be investigated, so reveal everything, even a minor parking ticket. The ASVAB scores required to get this job are not high, but I personally think that they should be higher. To qualify for 42A, ASVAB scores of 100 in General Technical (GT) and 90 in Clerical (CL) are required. GT is Verbal Expression and Arithmetic Reasoning, CL is also Verbal Expression and Arithmetic Reasoning, plus Mathematics Knowledge. In other words – English (Language Arts) and math. If your ASVAB GT and CL scores are not at least 120 you may want to consider another job. This job may not appear to be a brainy job, but it is. The Army Regulations that governs and guides the work that 42A’s perform are several feet thick, when in print. Army Regulation (AR) 614-200 on enlisted personnel management is about 3 inches thick, AR 635-200 on enlisted separations is about the same. I once knew a man who could quote paragraph for paragraph from either. He made Master Sergeant E8 in eight years, can’t be done today.
The AIT (Advanced Individual Training) for MOS 42A is nine weeks long at the Soldier Support Institute at Fort Jackson, South Carolina. Summers are just as hot in South Carolina as in Missouri, but the winters are not nearly as cold. A recent graduate described 42A AIT as really easy. The dorms are three people to a room with one double bunk and one single, three desks, three closets and a bath/shower. Class is Monday through Friday. A typical day is 5:00 AM wake up, clean area, PT at 6:30 then shower, get dressed and breakfast and be in formation at 8:45. March to class, lunch is in a nearby DFAC (Dining Facility) and released at 5:00 PM. They keep cell phones, ipads, computers, etc just not during duty hours. Civilian clothes when off duty. During the eight weeks and two days of the course, six weeks are spent in class and two weeks in the field. Class sizes are small, usually about 30 people. A platoon is a class.
The study includes; Researching Human Resource Publications; Prepare Office Documents Using Office Software; Prepare Correspondence, Identify Human Resource Systems; Maintain Records; Interpret the Enlisted Record Brief & Officer Record Brief; Create Ad Hoc Query; Perform Forms Content Management Program Functions; Prepare Suspension of Favorable Action; Prepare a request for Soldier Applications; Process a DFR (Dropped from the rolls) packet; Process Recommendation for Award; Process Personnel Strength Accountability Updates; Perform Unit Strength Reconciliation; Conduct a Personnel Asset Inventory (PAI); Issue a Common Access Card (ID Card); Maintain Emergency Notification Data; Prepare a Casualty Report; Create a Manifest; Employ the Deployed Theater Accountability Software (DTAS); Prepare strength accounting reports; Process a Request for Leave, Pass, and Permissive TDY (Temporary Duty); Perform Personnel Office Computations; Review a Completed Officer and Noncommissioned Officer Evaluation Report (NCOER); Process Enlisted Advancements for Private through Specialist; Process Semi-Centralized Promotions; Research Finance Actions; Determine Entitlements to Pay and Allowances; and Employ the Very Small Aperture Terminal (VSAT) System.

Army Human Resource Specialists are literally on every US Army post in the world, so they can be assigned anywhere in any type of unit. I always push going airborne, jumping out of airplanes, it’s a blast. Plus enlisting as a 42A with the airborne option, will put that person in an airborne unit, probably in a battalion headquarters, the lowest level at which 42A’s are used. Those are the best units in the Army, the best leaders and the highest morale, plus that is where Human Resource Specialists really learn their job. They deal with soldiers face to face on a daily basis, it pays to be a people person. In the S1 (Administration) Section of a battalion is an Adjutant Generals Corps Captain, and a 42A Sergeant First Class NCOIC (Non-commissioned Officer in charge), plus a Staff Sergeant, two Sergeants, a Specialist, and three Privates First Class. So, for the new enlistee who happens to be in the almost 20 percent of enlistees who will retire from the Army 20 years later, that is where he or she would want to start. 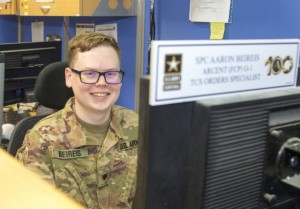 I spoke at our local high school veterans day assembly and found that very few people, especially young people, out here in the country know anything about the military. So, in January 2017 I started a column in our local weekly paper, titled "Life in the Army", in an attempt to educate people about normal life in the military. I retired from the army, as a master sergeant, in 1984. I spent a total of about 10 years in the 82nd Airborne Division, two tours in Vietnam, one with the 101st Airborne Division, one split between USARV, HQ and the 5th Special Forces Group. I was in the infantry, and in administration. I was a Drill Sergeant for two years, and three years of ROTC duty. I have tried to keep up ever since. View all posts by John Stockton