The soldier whose job is to setup and maintain computer networks and systems. Help people with computer problems, including swapping components, such as drives and motherboards, and routers, and keep all the computer systems operating, is Army MOS (Military Occupational Specialty) 25B Information Technology Specialist. These are the Army IT professionals. I have written before (see my article COMPUTER HACKER) about MOS 17C Cyber Operations Specialist, those are Top Secret people hidden away doing Top Secret stuff. The 25B’s are the everyday, every unit, computer professionals, who keep the systems up and running.

25B Installing a motherboard.

This is, with doubt, one of the best Army jobs that transfers directly to lucrative civilian jobs, and because the Army will turn you into an IT professional, it requires a five year enlistment The Army now communicates just like the rest of the world communicates, by computer, so it has a lot of IT professionals to keep it communicating, securely. Shoot, move, and communicate is what the Army does. That puts 25B in the Signal Corps. The AIT (Advanced Individual Training) for 25B is currently 20 weeks long at the Army Signal School at Fort Gordon, Georgia. This story is specifically about MOS 25B IT Specialist, I will follow it with another about other signal jobs, because the Signal Corps is currently undergoing a major overhaul.
First, this MOS requires a SECRET security clearance, because of the information to which they are exposed, so a person needs to be squeaky clean, other than minor traffic tickets. Getting a SECRET security clearance means a background check, which includes a national agency check, public and financial records search, and depending what that reveals, maybe personal interviews.
What a 25B IT Specialist does.
Install, operate, and perform unit maintenance on multi-functional/multi user information processing systems, peripheral equipment and auxiliary devices. Perform input/output data control and bulk data storage operations. Transfer data between information processing equipment and systems. Perform Battlefield Information Services (BIS) consisting of printing services, publication management, files, form management, reproduction services, Freedom of Information Act (FOIA)/Privacy Act (PA), unit distribution/official mail, correspondence management and classified document control. Troubleshoot automation equipment and systems to the degree required for isolation of malfunctions to specific hardware or software. Restore equipment to operation by replacement of line replaceable unit (LRU). Perform system administration functions for the tactical DMS. Install, operate, performs strapping, re-strapping, PMCS and unit level maintenance on COMSEC devices. Assist in the design, preparation, editing, and testing of computer programs. Draft associated technical documentation for program reference and maintenance purposes. Modify existing application packages using application, and operating system software, appropriate computer language commands and files.
That includes helping non-computer literate people, and going back in after work to install something for a commander or a section that is working late on a big project. You may be a hero, and you may be just that invisible computer person that makes it work. To be that successful IT Specialist, that gets out of the Army and directly goes to work at three times the salary, you also have to do more on your own. Ten years ago, a 25B, preparing to leave the Army, wrote that he had been accepted by Homeland Security at $85,000 a year. Certifications must be obtained on your own, and they are necessary both in the Army and required in the civilian market. A+ N+ Sec + are stepping stones, then CCNA.

25B setting up a VSAT (Very Small Aperture Terminal) 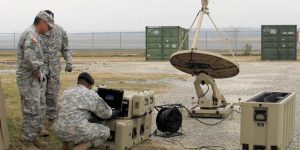 25B Quick set up training in the field on a VSAT.

Sample 25B resume from a few years ago.

My personal suggestion for 25B’s or anyone enlisting in the Army is take the airborne option, if you can get it, even if you have to wait a few weeks. Jumping out of airplanes is not only one of the biggest thrills in life, it puts you in an airborne unit, like the 82nd Airborne Division, or the 173rd Airborne Brigade in Italy, or the 4th Brigade Combat Team (Airborne), 25th Infantry Division in Alaska, or in a Special Forces Group, or in other airborne units at Fort Bragg, North Carolina. Airborne units are the most elite units to which you can be assigned after just going through regular training, plus the three week airborne school at Fort Benning, Georgia. Overall, combat units have better leaders, higher morale, and are better organized.
MOS 25B is not always available, you may have to wait several weeks to get it. There are thousands of 25B’s in the Army, but many slots are taken up by high school seniors, who start their processing long before high school graduation. A person enlisting for MOS 25B, spending five years in the Army, and then getting out, should have a stack of IT professional certifications and at least a bachelors degree in computer information systems. If not, they were lazy.

25B AIT student learning to set up a main router.