This was originally published in The Belle Banner, Belle, Missouri, August 8th 2018. I have not posted it before, at Life in the Army, because of the sensitivity.  Some of the photos may have copy rights, but I’m simply passing them on. I don’t receive any compensation for this, neither did I for the newspaper column, it is simply an attempt to educate civilians about life in the Army.

This column on March 14th of this year was titled “Dear Joe”, which was a letter to a teenager who, like most his age, does not have a future vision in mind. I recommended that he enlist in the Army for three or four years for airborne infantry, because there is no other experience in the world like it. This title “Band of Brothers” conjures up memory of the TV miniseries of Echo Company, 506th Airborne Infantry in the 101st Airborne Division in World War II.

This is about a current “Band of Brothers”.

Christopher Michael Harris was born in St Petersburg, Florida November 3rd, 1991. He was adopted, as a newborn, by Dennis and Susan Harris Kolean. Not long after, they moved to Jackson Springs, North Carolina, where Christopher grew up. He did spend many summers with his uncle, J Michael Harris, in Florida, because he loved fishing and the water. Jackson Springs is only about 15 miles from Southern Pines, North Carolina, which is on the “back side” of Fort Bragg. It is much smaller and quieter than the sprawling Fayetteville/Spring Lake communities bordering the main post. It has a fair sized military population, because some would rather drive the 25 miles through Fort Bragg every day and live in the small town atmosphere.

Christopher graduated high school, in 2010, from Grace Christian School, which is a small private Christian school in close by Sanford. The Sanford Herald reported; William Kerr, his closest friend in high school, said; “There was never a dull moment. There was never a time that I didn’t want to be with him. So smart, always taught me something and always there to protect me. If there was ever any problem or anything at all, he was the first person there. He always took care of everyone and was the most selfless person that I met, and put everyone else’s needs before him. He understood the line between work and play, so when it was play, he played hard. When he worked, he worked harder.” The soccer coach, Chris Pratt said: Soccer was kind of his go to sport. He was great. He was the hardest worker, very loyal. As a coach, you want a guy like that because he would do anything you asked him to do and he was kind of our bruiser, which made him very disciplined.” Head Pastor Joel Murr, who also coached in the athletics department said; “He just loved people. He was a popular kid. The girls will tell you that he had the prettiest eyes that anybody had ever seen. He was a handsome young man, just liked by everybody.”
After high school, Chris Harris worked in public services for the town of Pinehurst, which is about halfway between Jackson Springs and Southern Pines. Then in October 2013 he enlisted in the Army for Infantry with the airborne option. After completing Infantry OSUT (One Station Unit Training) and Airborne School he was assigned to Company A, 2nd Battalion, 504th Parachute Infantry Regiment, 82nd Airborne Division at Fort Bragg, North Carolina. The “Devils in Baggy Pants”.

Having been a Platoon Sergeant of an Airborne Infantry Platoon, I can tell you that there is a rank structure in that platoon, but there is also an unofficial pecking order and an unofficial leader in most platoons. Privates (PVT’s), Private First Class (PFC’s), and Specialist are lumped together as “junior enlisted”, and within that group there is often a “leader”, usually a specialist who is smart, quick witted, vocal, and if the Platoon Sergeant is lucky, positive. He is the guy who on mile 35 of a nonsense 40 mile road march, starts making cracks and makes everybody forget about their aches and pains, or at 6:00PM in the evening, after a four day field exercise, everyone is trying feverously to get equipment and weapons cleaned and turned in, and is frustrated because they are still there, starts making jokes and relieves the tension. He is also, hopefully, the guy who bypasses his squad leader and comes to you with; “Sarg, Smith has got some problems and I think he needs some professional help”. Smith could be a private or a sergeant. That’s who I think Chris Harris was, the platoon spark. A friend said; “He walks into a room and you know he’s there. Never a dull moment when he’s around, such energy he brings to everything he does.”

Through a mutual friend, Chris met Brittany Paige Maness. The friend said that they were inseparable from the time they met. They were married in Ashville, North Carolina, October 15th 2016.

On June 30th 2017, Brittany said goodbye to Chris at Green Ramp on Fort Bragg, as his unit deployed to Afghanistan. On July 31st Brittany learned that she was pregnant with their child. She contacted Chris in Afghanistan via Face Time, she said, “Chris you’re going to be a dad!” She said he was ecstatic, that he wanted to be a dad more than anything. She said he teared up at the news, and immediately shared it with his platoon.

Then on the evening of August 2nd Chris’ was with his team under Sergeant Jonathan Hunter of Columbus, Indiana, in a Mine-Resistant Ambush Protected vehicle (an MRAP) conducting a “partnered mission” security patrol with the Afghan National Army near Bagram Airbase when a suicide bomber, in a vehicle loaded with explosives, met the patrol and exploded next to their vehicle. Specialist Christopher Harris and Sergeant Jonathan Hunter were killed, the four others in the vehicle were wounded plus an Afghan interpreter. Colonel Tobin Magsig, the Brigade Commander, was in the next vehicle and helped get the paratroopers out of the burning MRAP.

Brittany said that she had sent Chris some texts, which he had not yet answered. She saw on some military sites, that she monitored, that two soldiers had been killed in Afghanistan, then two officers came to her door. After the notification they asked if there was anything else they could do. She said; “Yes I would like you to drive me to Chris’ parent’s house and be there when they are told.” They did.
The next day Brittany Harris posted on her Facebook page, “As the news spreads about the two soldiers killed in action yesterday in Afghanistan, it is with a very heavy and broken heart that I confirm that one of them was my husband Chris Harris.”
Some of you reading this out here in the middle of nowhere, who have no experience with the military, may think that infantry combat soldiers, who are in a business where they can get wounded or killed, are somewhat hardened to those circumstances. Not true! I’ve written before about how close an infantry platoon becomes. When someone is killed, it is like a member of your family. It tears your gut out. First there is anger, you want to go get them. Then absolute abject frustration, and finally acceptance, mourning, move on, but don’t forget them. Often the leaders have a lingering feeling of guilt that never goes away.

Initially Brittany Harris asked for privacy. She posted; “Right now my main concern is that I want to try and make sure everything continues to be healthy considering these crushing circumstances. I know you will all be respectful as I ask to be left alone. Thank you.”

Vice President Pence met the Angel Flight which brought Sergeant Hunter and Specialist Harris back to the United States.

Specialist Christopher Michael Harris’ full military funeral was on August 14th in the Sandhills State Veterans Cemetery, Spring Lake, North Carolina, just outside of Fort Bragg. It was one of the largest funerals many had seen. The 10 mile procession was led by 100 motorcycles of the Patriot Guard Riders, followed by about 50 Jeeps, each flying an American flag, from several Jeep Clubs, because of Chris’ love of Jeeps. Chris and Brittany were members of the Jeepers United Club. 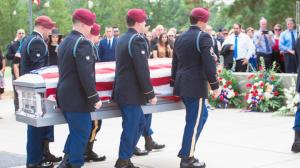 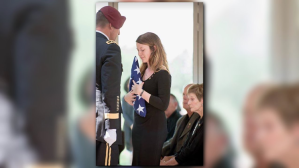 In October Brittany learned the baby’s gender. She said of Chris’s platoon; “They’re still grieving. They’re just doing it away from the rest of us. I wanted them to be the first to know the gender and reveal it, to let them know they’re family and part of this journey with me.” She sent small “confetti cannons” to the platoon in Afghanistan. They made a cell phone video of their impromptu ceremony. Corporal Nathan Bagley said; “My boy Harris, we’re gonna do it for him – we going to see what kind of baby he’s going to have.” They counted down and pink confetti exploded to applause, whoops and hollers and goofy dances.

That platoon landed at Pope Field on Fort Bragg on March 17th 2018, returning from Afghanistan. On that same day, Christian Michelle Harris was born.

Sergeant Nathan Bagley said; “Just knowing that we could come home to a baby girl that was awesome. When everyone came home that was the day she was born, so that made it ten times better.”

Brittany kept contact with the platoon members, and then decided to have a photo shoot with Christian and Chris’ platoon. She said; “They’ve been a part of her life before she was even born, and I know they’re going to be around for the rest of her life. No matter where the Army takes them all, I will be able to show Christian how they all came together for her.”

On May 29th Pinehurst Photography conducted the photo shoot. The following are their photos. 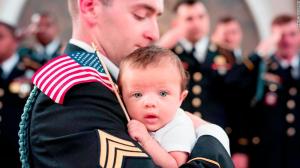 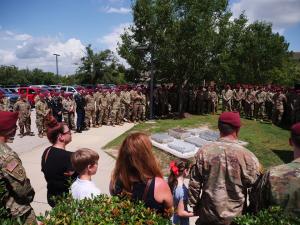 Today, the Devil Brigade came together to share a moment of silence to honor fallen Paratroopers Sgt. Jonathon Hunter and Spc. Christopher Harris. Today marks the one year anniversary of the suicide attack in Kandahar Province, Afghanistan that took them away from us. Our thoughts and prayers are with the families and loved ones of our fallen warriors.
“As long as we live, they too will live. They are now a part of us. We will remember them.”
Sylvan Kamens