If you are solid with your faith in God, and the military interests you, you haven’t reached your 35th birthday and are qualified to enlist in the military, this may be a job to consider. You can serve God and the military as an Army Chaplain Assistant. Army Religious Affairs Specialist, MOS (Military Occupational Specialty) 56M, is a Chaplain Assistant.
I’ve written before about Religion in the Army, but this is more in depth, specifically about becoming a Chaplain Assistant.
Every unit in the army, in the size of battalion on up, has a Chaplain and a Chaplain’s Assistant. They are the “Unit Ministry Team”. The official army description of a Chaplain Assistant says that he or she is an assistant to the Chaplain, not an assistant Chaplain, but in reality, the Chaplain Assistant does much more than that.
To become a Chaplain in the Army, a master’s degree in theology is required plus two years as a preacher, and have the recommendation of his dioceses, church, or denomination hierarchy. The Army has Protestant Chaplains of every denomination (Southern Baptist are the most numerous). There are Catholic Chaplains, Jewish Chaplains, and Muslim Chaplains. When ask if there would be humanist/atheist chaplains, an Army Chief of Chaplains replied, never. Humanism/atheism is regarded as a philosophy, not a religion. Same for Wiccans, which is not a recognized religious structure.
To become a Chaplain Assistant in the Army, you must meet the enlistment requirements, plus have two courses or one year in computer keyboard or pass a typing test at 25 words per minute, have a valid state drivers license, and be able to get a secret security clearance. Some other traits and qualities you should have; First, you should have a strong desire to help other people. In fact, that is almost a must, because that is what you will be doing. You should be firm in your belief in God, I never met a Chaplains Assistant who wasn’t, but I read a comment from one who wasn’t religious and didn’t like the job. You should be an outgoing people person who enjoys being around any and all people, regardless of race, religion, or ethnic background, a soldier is a soldier is a soldier. You should be a self-starter, comfortable working on your own, with little guidance from higher.
The Chaplains’ job is to administer to the spiritual and emotional needs of soldiers and their families. At battalion level, the Chaplain is a captain and the assistant a sergeant, at brigade level, the Chaplain is a major and the assistant a staff sergeant. The Unit Ministry Team is part of the command group, the commander, deputy commander and command sergeant major, which means the Chaplain answers only to the commander. The Chaplain and the assistant set their own schedule. There is no job in the Army with more autonomy than a Chaplain Assistant. 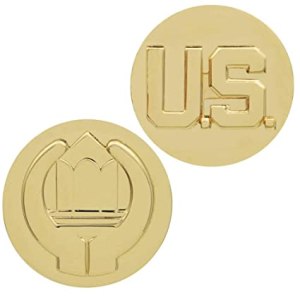 Enlisted collar insignia for Army Chaplain Assistants.  They and the Chaplains are their own ‘Corps’.

Any soldier can go see the Chaplain anytime. They don’t have to give a reason, just say, “I want to see the Chaplain”, and they are released to do so. Whatever a soldier or family member tells a Chaplain Assistant is in strict confidence, and the assistant may tell only his Chaplain. If a soldier tells a Chaplain Assistant, “I’m going to shoot the First Sergeant at the range tomorrow.”, he or she may only tell the Chaplain, or at the most, tell the First Sergeant that he better not go to the range tomorrow. The Chaplain makes his or her own judgement call on what to do with information they receive, and all I ever knew were pretty common sense individuals. When I was the Senior Drill of a coed basic training company, I was in the process of commanding right face, forward march to move to a range, when a Drill Sergeant walked up to me and said; “I’ve done fell in love with female trainee. I’m going to see the Chaplain”. No time to do anything but march the company to the range, but fortunately the Chaplain immediately notified the battalion commander, who relieved the Sergeant from drill duty, and got him away from the trainees.
There have been circumstances where there was just a Chaplains Assistant, and no Chaplain. I don’t think that situation is ever purposely created, but Chaplains go on leave, they go to schools, and they may get reassigned before a replacement arrives. One Chaplain Assistant, who was in that situation, was asked if he ever overheard any “Oh NO’s” during a confession. First, Chaplain Assistants don’t hear confessions. His answer was;
“Not overheard, this was directly to me. PFC, infantry type comes in and starts spilling his guts about his wife’s manic depression and princess complex, how she was going kill herself and their unborn child if he didn’t start coming home sooner (poor guy was just a private on the line, his time was out of his control). Wife refused to go to behavioral health, chaplain, or anybody because “there’s nothing wrong with me, you just don’t love me enough to be home”. At the time it was just me, no chaplain, so I just kind of handled it as best I could, and got him set up to go with her to her next OB/GYN checkup so he could drop subtle hints to the doc about her mental health issues. It was touch and go, but eventually she got onto some anti-psychotic drug once the baby was born. He came and found me later, once things calmed down, and was the most grateful guy I’ve ever seen. Thankful that his family was going to be alright.” 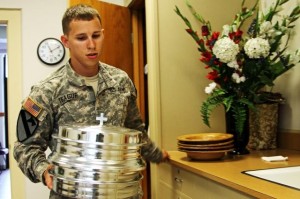 A private in the infantry has a sergeant fire team leader, a staff sergeant squad leader, a sergeant first class platoon sergeant, a platoon leader, a first sergeant, and a company commander, all of whom have attended classes on how to spot soldiers with problems, and how to deal with different soldier personal problems, and several have probably had to deal with similar circumstances in the past, but sometimes young soldiers won’t tell their chain of command that they have problems. That’s when they go to see the Chaplain.
Chaplain Assistants don’t get to pick the religion or denomination of their Chaplain. They may be assigned to a Southern Baptist, a Catholic, or a Jew, and there are a few Muslim Chaplains. The Chaplain could be a man or a woman. There are now many female Chaplains. There are also two types of Chaplains to which an Assistant may be assigned. One with no military experience, prior to becoming a Chaplain, and attending the three month Chaplain Basic Officer Course, and the other is one who has had prior military experience. If assigned to a Chaplain with no prior military experience, the assistant has an even bigger job in teaching the Chaplain “army stuff”, and making sure that the Chaplain has the proper army equipment and material to participate in whatever activity occurs.
There are many Chaplains with prior military experience. I ran into a couple who were ex infantry officers, who served their initial commitment, left the Army, and came back as Chaplains. Some served as a Chaplain’s Assistants, left the Army, became qualified and came back in as Chaplains. One assistant said; “You can’t pull the wool over their eyes, because they know your job”.
Chaplain Assistants may attend most army schools that other soldiers attend. Airborne, Jump Master, Air Assault, and some have completed Ranger School. Chaplains also may attend those schools. There have been several Chaplains who completed Ranger School. To combat soldiers, on the line, a Chaplain with a Ranger Tab is “one of us”. There have been several Chaplains who have gone through the Special Forces Assessment and Selection course and the Special Forces Qualification Course, earning a Green Beret, so they would be more readily accepted by the Green Berets to whom they would minister.
Someone wanting to become an Army Chaplain Assistant would first attend the 10 weeks of Basic Combat Training. A few years ago, army basic training was as easy as it had ever been, it is now as hard as it has ever been. I’ve written a few stories about army basic training. Be prepared before you jump in. The AIT (Advanced Individual Training) for Religious Affairs Specialist MOS 56M is seven weeks long at the Army Chaplain Center and School at Fort Jackson, South Carolina. It is one of the easiest AITs, no overnight field exercises. That doesn’t mean no PT. Everybody in the Army does PT (physical training). In AIT they study English grammar, spelling and punctuation, typing and clerical skills, preparing forms and correspondence in Army style, roles and responsibilities of Army Chaplains, and religious history and background. They learn how to set up religious services, coordinate the Chaplains travels with the ongoing operation, how to safeguard privileged communications, and how to perform in crisis management. They learn how to use advanced digital equipment, maintain reports, files, and administrative data for religious operations, also how to receive and safeguard Chapel Tithes and Offering Funds.
You may have to wait for this MOS to become available. Not only is it a small field, but current soldiers can reclassify into 56M. People discover God in many different ways. As previously mentioned, I’ve met Chaplains who were former infantry officers, and a couple who were former enlisted men. Then there is the story of Jeff Struecker. If you haven’t heard of Jeff Struecker, google him, there’s lots of info. The book and movie “Black Hawk Down”, is about the battle of Mogadishu, Somalia in October 1993. Jeff was a sergeant, squad leader in the 150 man Ranger Company that went into the city, 140 were wounded with 18 killed, the fire was so intense, from so many directions, Jeff said that he thought he was going to die. He started talking to God. God answered. Jeff and a ranger buddy went on to win Best Ranger competition in 1996. He left the Army, completed divinity school, and returned as a Chaplin. 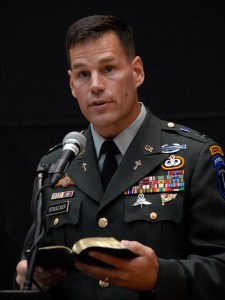