The most requested assignment locations in the Army are Hawaii, Germany, and Italy. Being assigned to one of those places is often the luck of the draw. It is possible to enlist for one of those areas, but not very probable. If you want to see Europe and be in an exciting unit that also travels, that would be the 173rd Airborne Brigade headquartered in Vicenza, Italy. If you try to enlist for Italy, you may wait until you are too old to join the Army and never get called. A possible way for a new enlistee to get assigned there is to enlist for a job he or she wants, with the airborne option. Then on every dream sheet and at every opportunity on their AKO account (Army Knowledge Online) with the ASK key (Assignment Satisfaction Key), request the 173rd. Initial assignments are determined during AIT (Advanced Individual Training), with the first consideration being the needs of the Army, then the desire of the individual.
The 173rd is known throughout the military as “the SkySoldiers”, internally they refer to themselves as “the herd”. The Brigade Headquarters and four battalions are at Vicenza, and two battalions are located at Grafenwoehr, Germany. Vicenza is about 50 miles east of Venice at the base of the Alps. Graf is in Northern Bavaria. They are about 8 to 10 hours driving time or two hours flying time apart.

While the 82nd Airborne Division is the United States military global rapid response force, the 173rd Airborne Brigade is the US rapid response force for Europe. It is airborne, high speed, and completely professional. Career paratroopers from the 82nd do their “overseas time” in the 173rd. Many airborne soldiers re-enlist for the 173rd. They train in several areas of Italy, including the Alps, as well as in Germany, Poland, Lithuania, Sardinia, Spain, England, and other NATO (North Atlantic Treaty Organization) countries.
The 173rd Airborne Brigade Combat Team Headquarters is at a new Army post, built just for the 173rd, called Caserma Del Din. It is on the site of an old Italian Army airfield on the far east side of Vicenza. It is somewhat isolated, but the barracks and facilities are new. The Brigade Headquarters, the 2nd Battalion 503rd Infantry, and maintenance, supply, transportation, food service, medical, engineers, military intelligence, and signal people are at Del Din. On the other side of Vicenza in the original old post of Caserma Ederle is the 1st Battalion 503rd Infantry. The 1st Squadron 91st Cavalry, the 173rd’s reconnaissance battalion, is at Grafenwoehr Germany, as well as the 4th Battalion 319th Artillery. Belle’s very own Kevin Altemeyer, class of 1981, teaches math and science at the American Middle School at Grafenwoehr.
I’m going to follow some of one infantry battalion’s adventures for the past year. An Infantry battalion has around 800 soldiers. It is commanded by a Lieutenant Colonel, with a full staff. It also has many soldiers who are not infantrymen, personnel clerks, supply clerks, cooks, mechanics, truck drivers, medics, and CBRN (Chemical Biological, Radiological, Nuclear) people.
I’m going to follow the 1st Battalion 503rd Infantry Regiment. Partly because they have put out a lot of information, and partly nostalgia – they are the only battalion located at Caserma Ederle, in the same buildings I occupied in the 509th Airborne Battalion Combat Team. The 503rd is nicknamed “The Rock”. In the Pacific in World War II, the Japanese fought a five month battle to take the island of Corregidor, which is located at the mouth of Manila Bay, forcing General McArthur to evacuate the Philippines. Corregidor was called the rock. Outnumbered two to one, the 503rd Parachute Regimental Combat Team made a combat jump onto Corregidor. That battle is considered by many to be the most vicious combat action of the war. The 503rd suffered around 200 killed and about 800 wounded, but took the island. When the battle was over, only 50 of the estimated 6,700 Japanese soldiers remained alive. The 1st 503rd is “First Rock”. The 173rd has had the unique luck or fate to have been given some of the most dangerous combat missions. The 503rd alone has a whopping 16 Medal of Honor winners. Two from World War II, eleven from Vietnam, and three from Afghanistan. 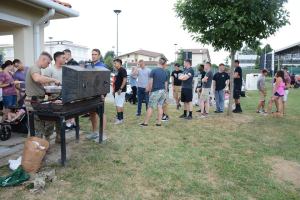 On Thursday June 29th 2017 the battalion relaxed with a family fun day with kids jumping from the 34 foot tower, displays and a plain old cookout get together. It was also a chance for the soldiers and families to say good bye to Lieutenant Colonel (LTC) Michael Wagner and his wife, because the next day was a change of command ceremony where LTC Wagner, who had commanded the battalion for two years, turned the colors over to LTC Robert Shaw, the new Battalion Commander.
The last week of August Alpha (Attack) Company flew to Croatia and participated in a 10 day live fire exercise with the Croatians.

In October it was Eagle Strike 2017, as the “herd” jumped into the large Grafenwoehr Training Area and trained with German paratroops in various live fire exercises. They coordinated live fire of mortar, artillery, and helicopters into the exercise. They fired pistols and went through an Urban Breach Course and learned how to breach doors with shotguns and explosives. It was two weeks of intense, down-to-business, live fire training, showing Europe and its neighbors that they are the “real deal”. 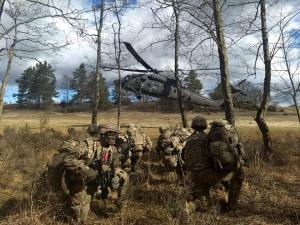 At thanksgiving it was the annual flag football officers vs enlisted “Turkey Bowl”. The officers won.

Then everyone dressed and enjoyed a traditional thanksgiving meal at the DFAC (Dining Facility).
Mid December First Rock held the annual Chaplain’s Crazy 5K run and Christmas party. The battalion also conducted platoon competition, pitting all the platoons against each other in a test of all their skills. The 1st Platoon, Alpha (Attack) Company has bragging rights for a year, as the best platoon in the battalion.
Training takes a break for a couple weeks during Christmas and New Years, there are battalion and company Christmas parties, as well as friends getting together, services in the chapel and a lavish Christmas Dinner and service in the DFAC attended by most families.
After the holidays it was back to business with a series of parachute jumps, some with Italian Paratroops and an exchange of wings, authorizing the SkySoldiers to wear Italian jump wings. There was company training and then training for EIB (Expert Infantryman Badge) testing. After parachute wings, the EIB and the EFMB (Expert Field Medical Badge) are the two most coveted non-combat badges worn on an army uniform. It is grueling go/no-go test over several days that covers every infantry skill. Actual testing started on Tuesday February 7th, with infantrymen from Italy, France, and Croatia also participating.

Finally on Wednesday February 15th, after a 12 mile ruck march, 351 of the 727 who started were awarded the EIB.

At the end of February First Rock conducted a parachute jump with a follow-on mission of seizing an objective. They said it was to stay sharp and show potential adversaries that they are the best at what they do. Throughout March and into April was exciting training with lots of live fire, close quarter combat drills, recon sniper firing, and breaching on the demolition range and more parachute jumps with objectives to seize.
The month of April and into May was intensive training in Germany starting with a night jump into Hoenfels Training Area in Germany, then load on Blackhawk helicopters and an air assault into the Grafenwoehr Training Area with company and battalion movements and objectives.
On June 1st the battalion “dressed up” and held a formal Battalion Ball.
The guest speaker was Sergeant Major of the Army Daniel Dailey.

On Monday June 12th, the battalion rigged personnel and equipment, loaded planes and jumped into Spain for two weeks of intensive training with the Spanish army, defense, offense, live fire, and parachute jumps, ending with a day of friendly competitive games between the First Rock SkySoldiers and the Spaniards.
Summer in Europe is when everyone comes and goes. Last summer the battalion commander changed, this summer the Command Sergeant Major changed. New soldiers and families arrive, as others leave. The new arrivals are all excited ready for a new adventure. Those leaving are of mixed emotions between “going home?” and leaving behind some very close friends. Single or unaccompanied soldiers spend 24 months in Europe, while those with families (accompanied) a normal tour is 36 months. Many extend their tour for another year.
One single soldier there said; “Del Din is kind of isolated, but it does have a bar and a Subway, the gym is absolutely outstanding, and parking is right next to the barracks. Lake Garda is great and you can bungie jump at the McDonalds in Austria you will always stop at. BOSS trips out there are on point.” The BOSS (Better Opportunities for Single Soldiers) program was started in 1989. They go to the beach, they go hiking and skiing in the mountains, horseback riding, bike rides, and community cleanup projects to name a few.
When we were there Betty and the kids made a couple trips to Saint Marks Square in Venice, plus we bought a camper and toured Europe. We went to see the leaning tower of Pisa a couple times, we toured the Newschwanstein Castle (the Disney Castle) and several others in Germany. We went on many Sunday rides up in the Alps. Where Germany was densly populated and everything regulated, Italy was more “laid back” taking life as it came.