This was originally published in The Belle Banner, Belle Missouri December 20th 2017. If you would like to see the current articles as they are published, you may subscribe to The Belle Banner by calling 573-859-3328, or email tcnpub3@gmail.com, or mail to The Belle Banner, PO Box 711, Belle, MO 65013. Subscription rates are; Maries, Osage, and Gasconade County = $23.55 per year, elsewhere in Missouri = $26.77, outside Missouri = $27.00, and foreign countries = $40.00.
Christmas is the celebration of the birth of Jesus Christ. It has been my observation, in life, that soldiers, even those who don’t profess religious beliefs, experience a stronger feeling for their fellow man at Christmas, than at other times of the year.
Young soldiers in basic training or advanced individual training (AIT), get leave for Christmas and New Years, regardless of how long they have been in the Army or how long they have left in their training. When I was a Drill Sergeant It was called EXODUS, now it is simply called Holiday Block Leave (HBL), and it is a major operation at every training post in the country. The soldiers have to pay for their transportation home and back, but the Army coordinates and secures their plane and or bus tickets, insures that they are packed, and have their proper leave papers, then delivers them to their transportation. If you happen to be around Fort Leonard Wood December 20th or 21st you may see literal convoys of Greyhound busses going in and out of the Fort. About 570 Drill Sergeants will insure that 6,500 trainees get to multiple MWR (Morale, Welfare, and Recreation) offices which will process around 4,000 plane tickets and 1,500 bus tickets for the trainees 14 day holiday leave. A very few don’t take the leave, because a soldier accrues 2.5 days of leave time each month, and if they have only been in the army a month and take a 14 day leave, they are six months in the hole for leave time. Most do take leave. Those who don’t are consolidated into one company in each battalion or brigade, and some Drill Sergeants who are not leaving the area watch over them.
In regular units Christmas leave depends on where the unit is located and what it is doing. When I was in the Army, every soldier in the unit couldn’t go on leave at the same time. That has changed. The Army started “block leaves” when units were returning from deployments of nine to fifteen months, to Iraq and Afghanistan. Now most divisions try to insure that units have written into their annual master training schedules two 2 week block leaves, one in the winter around the holidays and one in summer.
For those in the states who don’t get to go home for Christmas, there is a great Christmas dinner in the Dining Facility (DFAC), with the leaders serving, just like at Thanksgiving. 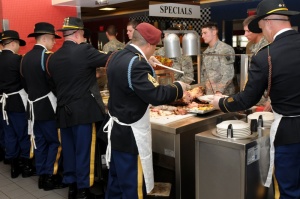 Brigade Command Sergeant Major offering the Brigade Commander his Christmas dinner of an MRE (Meal Ready to Eat).
For those deployed “down range” Christmas is a little different. If you were lucky enough to be at Balad Air Base in Iraq, it was a good Christmas Dinner.

For those further down range Christmas is even more different.

The tree came from “Trees for Troops”, which is an operation of “The Christmas Spirit Foundation. They express ship live American farm grown Christmas trees to deployed troops. The Platoon Leader, First Lieutenant Ryan Cowan, of this Artillery Platoon of the 101st Airborne Division, wrote the family whose farm donated the tree and thanked them for the Christmas spirit.
Those who don’t get a tree improvise.

Sometimes Santa even makes it to the field. 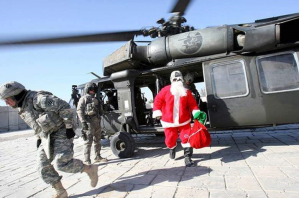 The hardest trained and most used division in the armed services always has a brigade on stand-by to deploy anywhere in the world, which doesn’t get to go home for Christmas, and still it has the highest morale. Some unknown paratrooper wrote the following;
“Twas the night before Christmas. And high in the sky. A single, lone plane – through the air did fly. On board a Paratrooper. And pallets of toys. Ready for heavy drop. To good girls and boys. Now Santa stands ready. Only ten minutes more. The jumpmaster says “Stand in the door!” Santa Claus jumps out. As the red light turns green. His parachute rigged toys. From the ground can be seen. The toys fall in chimneys. All across the land. Bringing joy and smiles. And a Christmas so grand. The Christmas drop was successful. And Santa PLF’s with precision. Because Santa is a paratrooper. With the 82nd Airborne Division. Merry Christmas.