This was originally published in The Belle Banner, Belle Missouri August 15th 2018.
When I finished basic training, with the 6th Armored Cavalry Regiment, at Fort Knox, Kentucky, the leadership naturally tried to interest us in Armor. There was an M-60 tank, which was fairly new then, on display. We were invited to climb on it and get in to check it over. I took one look down into that tank and decided I would rather walk.
If you want to be in the Army in combat arms that takes it to the enemy, but you don’t want to walk, that pretty well leaves you with Armor, i.e. tanks. That is the M1A2 Abrams Tank. 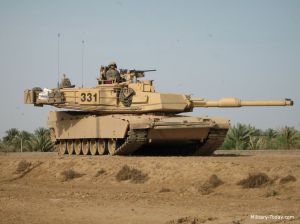 The M1A2 Abrams is a 12-foot-wide, 8 foot tall, 32 foot long, 68 ton, 9 million dollar hunk of steel with a protective armament of depleted uranium. It is also the most technologically sophisticated and lethal tank on the planet. An Army Lieutenant Colonel said that it is like a giant computer inside a steel box. From the pin point laser range finder and automatic computerized gun adjustment to guarantee first round hits to the Inter-vehicle information system (IVIS) which links all the tanks on the battlefield together so each Tank Commander can see where all the other tanks are located and share enemy information while encrypting it from enemy view. It can hit up to six targets a minute up to two and one half miles away. The main gun is 120 mm cannon which fires different types of rounds, including a kinetic-energy anti-tank depleted-uranium, sabot-wrapped penetrator built to totally liquefy heavy armor over vast distances. There are also two 7.62 mm machineguns and a 12.7 mm machinegun mounted. The specifications say it has a top speed of 45 miles per hour. That is because the 1,500 horse power engine that runs so quiet it has been called “whispering death” has governors set for that speed. Sergeants testing it in the 1970’s said it will run twice that fast, and is as nimble footed as a four wheeler. During the Iraq war Abrams tanks were scoring kills of the top Russian tanks at 2,500 meters. The Russian tank guns had a maximum range of 2,000 meters, so they were being hit before the US tanks came within their range. The Abrams has a crew of four. A Tank Commander, a Gunner, a loader, and a driver.
All but the driver work inside the tank turret. The lowest ranking job on a tank crew, the first job, is loader. The loader rides on the left side of the turret, toward the back. His job is to pull rounds from the ammunition compartment and load the 120 mm main gun. The gunner rides on the right side in the front area of the turret. The gunner pinpoints targets using the laser range finder and computerized firing system and fires the main gun. He tells the loader which round to load. When the main gun fires it recoils inside the turret. Inattention during live fire is extremely dangerous. The Tank Commander rides on the right side toward the back of the turret. The Tank Commander is in charge of the tank’s operation, he has several periscopes and a joystick controlled night vision viewer. He can monitor the tank’s various systems and its position on the integrated display. While the gunner is firing, the Tank Commander can be scanning for more targets. He communicates with other Tank Commanders and his leaders, as well as his crew.
The driver sits in the front section of the hull, directly under the main gun. It is a small space so the driver is leaned back in a form-fitting bucket seat. One driver said it is like riding in a recliner, very comfortable. The driver steers with a motorcycle style handlebar and accelerates using a twist grip throttle. Brakes are pedals on the floor like a car. The tank dash board is in front of the driver, called the driver’s integrated display (DID). The drivers has three periscopes called vision blocks, he can also use a night vision sensor at night. The Tank Commander tells the driver where to go and what to do. The Tank Commander is up higher and can see more than the driver.
So, what is life like in an armor unit? I said once that the Air Force’s primary interest is airplanes, the Navy’s is ships and planes, and the Marines and the Army’s primary interest is people. Well, if you’re in an armor unit, the primary interest is that tank. Everything revolves around your tank. If you are not riding in it, you are working on it. In light infantry, like airborne, if you don’t have anything on the training schedule for a particular day (very rare), that day may turn into Squad training or area maintenance, in armor – you go to the motor pool. If your tank is not conducting training it is in the motor pool, which means you are in the motor pool working on your tank. Tanks get very rough treatment, they break. Plus there is preventive maintenance – all the time. Greasing, adjusting, cleaning, painting, filling out forms swearing that you have done all those things. And yes Sergeant and Staff Sergeant Tank Commanders also work on their tanks, but tankers don’t walk and tankers don’t sleep in the rain, and many live for the days they get to live fire. Some call it the Army’s super sniper rifle. One person said; “Tanker’s really have no skills for the outside world, but it is damn fun. I got out for 6 months after serving 4 years and now I am going back in. I miss the crap out of it. 70 tons +50mph + 120mm gun = lots of excitement.”

Army MOS (Military Occupational Specialty) 19K Armor Crewman requires an ASVAB score of 87 in area CO (Combat Operations). Area CO is a composite score of four tests, word knowledge, paragraph comprehension, automotive and shop information and mechanical comprehension. All army jobs are now open to women, and there are a few (only a handful) of women 19K’s. It is a combat job so the physical requirements are tougher than for support jobs. Armor crewmen are trained in OSUT (one station unit training) companies at Fort Benning, Georgia. That is basic combat training and armor crewman training combined in one company. The training is 15 weeks long. The first four days to a week are spent in the reception battalion processing into the Army, medical, dental, administrative and uniforms. The first eight weeks in the company is regular basic combat training. The first week in the OSUT company trainees learn how to stand, turn, salute, march and talk. They also get their rifle that first week and learn to keep it with them. The second is first aid, land navigation and the gas chamber. The third week is hand-to-hand combat, the obstacle course, and the confidence tower (rappelling). Week four is all about the rifle, the M4 carbine. Trainees dissemble, assemble and clean the rifle, they also learn marksmanship techniques, position, sight picture, breathing, and trigger control. Week five is spent on the firing ranges. Qualification range then moving targets and response firing. Week six is more weapons. Familiarization and firing the M2 .50 cal machinegun, the M-240 machinegun, the M-249 squad automatic weapon and the AT-4 anit-tank weapon. Week seven is tactical movement, throwing live hand grenades, and combat in cities. Week eight is a 10 mile road march to a 4 day field training exercise called “the forge”, and convoy live firing from moving vehicles. The week ends with a beret donning ceremony, ending the basic portion of training. Week nine the trainee starts learning about the M1A2 Abrams tank. How to get in and out of the drivers station, where the instruments and controls are located and what they do, and how to react to a fire. Week ten is about the loaders station. How to load and maintain the main gun, how to operate the tanks radios, how to identify different types of ammunition. Trainees have 15 seconds, experienced loaders can load in 2 to 3 seconds. Week eleven is spent driving in tank simulators in all kinds of terrain and conditions. Week twelve is learning night vision devices and driving Hummv’s on and off road. Week thirteen is driving the tank, also how to maintain it and refuel it. Week fourteen is in the field, driving tanks through various terrain conditions, also firing the main gun and the machineguns in day and night. Week fifteen is a 15 kilometer road march back to garrison, a rite of passage ceremony from basic soldier to tanker, awarding of the Armor Branch insignia, then clean up, out-process and graduate.
New Armor Crewmen are assigned where ever the Army needs them, which could be Fort Benning (Columbus) or Fort Stewart (Liberty) Georgia, Fort Hood (Killeen) or Fort Bliss (El Paso) Texas, Fort Riley (Manhattan) Kansas, Fort Carson (Colorado Springs) Colorado, or Korea. During the cold war, Germany was thick with US Armor and Poland has recently offered to pay the United States the cost of permanently stationing a Brigade in Poland. If we do I would suspect that there will be tanks.