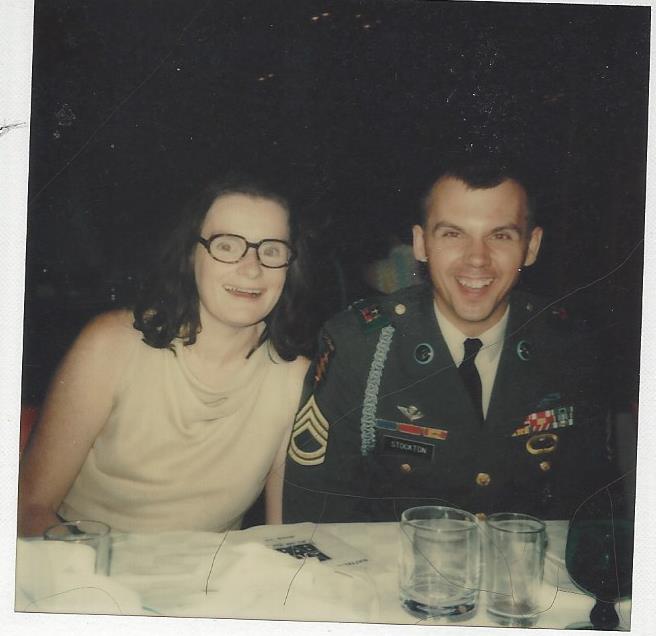 This was originally published in The Belle Banner, Belle, Missouri January 17th 2018.
AIRBORNE!! ALL THE WAY!!! I’ve written repeatedly and preached about going airborne if you are going into the Army, well this is about airborne school. It is easy.
New soldiers who have been through basic training and have completed Advanced Individual Training (AIT), such as Human Resource Specialist at Fort Jackson, South Carolina, or Unit Supply Specialist or Allied Trades Specialist at Fort Lee, Virginia, or Combat Medic at Fort Sam Houston (San Antonio), Texas, or Geospatial Engineer or Combat Engineer at Fort Leonard Wood, or any of dozens of schools and locations, who have the Airborne Option in their contract, will be assigned to the 1st Battalion, 507th Parachute Infantry Regiment (PIR) at Fort Benning, Georgia, to attend the Basic Airborne Course. In house, it is called “Jump School”. The biggest surprise for new soldiers, who have been supervised by Drill Sergeants since they enlisted, in reporting to Building 2747, the 1st 507th Headquarters, located at 7481 Riordon Street, is that they are on their own.
Upon signing in at the headquarters, students are told what building they will be living in, males and females are in separate buildings or separate floors. Everyone lives in an open bay, enlisted and officers separated by a wall. Students are all ranks, privates, new lieutenants, sergeants, captains, and they are from all services, Marines, Sailors, and Airmen. Occasionally a Sergeant Major or a Colonel is a student. I went through with three Air Force Majors, who had been fighter pilots and were switching over to troop carriers. They were going through airborne school so they would know what was happening when they dropped paratroopers. Airborne operations level the ranks. There are only two types of people in the hold of an airplane full of paratroopers, jumper and jumpmaster. The jumpmaster may be a sergeant, a captain or a colonel, but whatever his rank the jumpmaster has absolute charge of an airplane full of jumpers.
The instructors are very “laid back”, they don’t yell or demand, they are very professional. They are there to teach a skill, how to safely jump out of an airplane. EARLY the first thing on the first morning is the PT test. It starts at 0330, yes that’s 3:30 AM. Pushups and situps have to be done correctly or they don’t count. Males have to do a minimum of 42 correct pushups in two minutes, females 19 is the minimum. Both males and females have to do a minimum of 53 situps in two minutes. The maximum time for males for the two mile run is 15:54, females is 18:54. The flex arm hang is for both males and females. It is a pull up, palms facing the body, start from hanging on the bar, pull up chin above the bar and hold there for 20 seconds. Some females may have to prepare for this. That PT test is no joke, many drill sergeants in basic and AIT will count a pushup or situp that would not be counted at Airborne School. They don’t care what your score is after you meet the minimum requirements. If a person doesn’t come all the way up or go all the way down the pushup or situp doesn’t count, if the fingers interlaced behind the head come loose, that situp doesn’t count. Anyone who fails is not admitted to the course. One day at jump school would be embarrassing. There is also a minimum weight of 110 pounds, which must be maintained throughout the course. If a person can pass the PT test and jump out of an airplane, they can make it through jump school.
The first week is Ground Week. The week starts with classes, then practicing. A mock airplane is used to teach actions in the plane, door position and exiting the aircraft. The PLF (parachute landing fall) is taught the first day, and practiced all week. First by jumping off a small platform (1 foot high), rolling into a landing on the balls of the feet, the calf of the leg, the thigh, the buttocks, and the pushup muscle, to absorb the impact with the ground. Then a 2 foot high platform, and then a 4 foot high platform. The PLF is practiced over, and over, and over for hours. Every day starts with PT, including a normal two mile run, and probably a four mile run in ground week and one in tower week. Students are released at 1700 (5:00 PM), until 2300 (11:00 PM) bed check. Students say that the DFAC (Dining Facility) is amazing, steaks, omelets, shrimp, etc., but there are also an Arby’s, a Subway, and a Convenience Store within a five minute walk. There are theaters and a Dunkin Donuts within a 10 minute walk, as well as a great gym. There is no training on weekends, and there are a lot of activities both on post and off. After many hours doing PLF’s, students move to the Lateral Drift Assembly. The students are in a parachute harness, hooked to a zip line, pulled along the zip line and dropped, to simulate making contact with the ground at speed. Also, at the end of ground week students jump from the 34 foot tower. Students are in a parachute harness hooked to a cable which slopes to a mound a couple hundred feet away, and are graded on their door exit and immediate actions in the air. When airborne school was started in 1940, some psychologist must have decided that 34 feet up was the optimum height, where a person afraid of heights would experience fear, because it is the only place I saw anyone quit jump school. If you are afraid of heights, DON’T LOOK DOWN. The second time you will be alright, because then you know that you are not going to hit the ground and die. 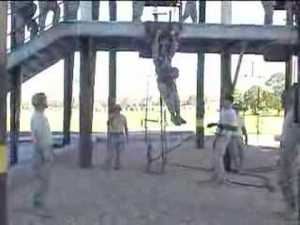 The second week is Tower Week. More time is spent on the 34 foot tower, practicing mass exits, in other words no pausing to get a door position. Then there are the 250 foot towers. First there is suspended harness training, the student is suspended in a parachute harness, with the parachute risers (straps attached to the harness and to the parachute suspension lines) attached to a ring above. It is used to teach students how to slip (guide) the parachute. It is commonly called suspended agony. Then there is the swing landing trainer, which is like suspended agony except they get you swinging and drop you to see what kind of PLF you do. At the 250 foot towers the student is in an open parachute, which is attached to a large ring. The parachute and student are lifted 250 feet up and released. It is used to teach students how to guide the parachute in the air. That is basically it, the final is jump week.
The third and final week is Jump Week. Students will make five jumps from a C-130 or a C-17 or both. There is no PT, and you eat MRE’s (Meal Ready to Eat) about all week. The day starts EARLY. At about 0300 (3:00 AM), the class must be formed and ready to run (double time) (trot) about a mile to the parachute shed at the airfield. Normal training parachute jumps, in the Army, take a lot of time, and airborne school is worse, because they have never done it before. First the manifest is read for each plane, then there is sustained airborne training, which is performed before every normal parachute jump in the Army. Sustained airborne training consists of going through a mock plane and exiting a mock door and PLF’s off of a four foot high platform, and briefings on what to do in case of a wire, tree, or water landing. Then through the parachute shed, where the main parachute and reserve are issued. Students put the main parachute on a shoulder (the main weighs 38 pounds), carry the reserve (15 pounds) in the other hand and RUN (double time) about 400 yards to the rigging shed. Students are paired with a buddy. The buddies help each other get their parachutes and the reserves harnessed up properly. They will be checked by instructors a few times, then they sit and wait for the final JMPI (Jumpmaster Parachute Inspection). That is when “the Jumpmaster” of that airplane performs his jumpmaster inspection. If you are a student, after you have been JMPI inspected, you sit and DO NOT TOUCH ANYTHING. Don’t touch your helmet straps, your harness, anything. That is jump school, safety is their greatest concern, if an instructor sees someone touching something, that student may be pulled and not finish, because he could be altering something. There are four day jumps, one of which will be with combat equipment, then the final jump is at night with combat equipment.
Graduation is normally 0900 (9:00 AM) on Friday, but if weather has pushed the last jump to Friday, graduation will be held on the drop zone, after the last jump. My class made three jumps in one day, fighting the weather.
I was the second jumper from the door on my first jump, behind an Air Force Major, the other two Air Force Majors were one and two at the other door. After we got out of the airplane with the parachutes open, I became so engrossed with the conversations between those three that I didn’t pay any attention to the ground. I landed flat footed, with my feet spread, and did a quick hard squat in the Georgia sand, luckily I didn’t break anything and no one saw me. From then on I paid attention. When that chute opens, it is the greatest feeling in the world, it is an exhilaration that is hard to explain. It’s a blast!
GO AIRBORNE!