Army uniforms are also changing. The new Army uniform, which will start being issued next summer, 2020, is almost a knock off of the World War II uniform, down to the brown shoes. The current blue uniform will be kept for formal wear. Basic soldiering in this ultra hi-tech Army is going back to its roots in World War II. While attempting to increase the size of the Army, standards have not been lowered, and training is longer and harder.

I have written before about how the United States Army is the most feared army in the world, not because of size or weaponry or technology, but because of the trust and confidence placed in the individual soldier. If an infantry company is helicoptered into a hot area and becomes scattered, individual soldiers form together, because all have been briefed on the complete mission, and they attack their objectives, even if there are no officers or sergeants present. None of our potential adversaries can do that. The US Army is the smartest, the most morally healthy, best trained, and will soon be the most physically fit army in the world 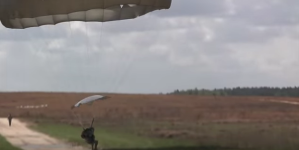 Paratrooper in the air and landing.

So, who is going into our Army now? A former Belle girl, Haley Shanks, graduated from Basic Combat Training at Fort Jackson, South Carolina on October 17th. The guest speaker at the graduation ceremony was Command Sergeant Major (CSM) Martin S. Celestine, who is the CSM of the Infantry and Armor Center and Fort Benning, Georgia. In his remarks, he gave some details about the group graduating from BCT. They ranged in age from 17 to 39, yes 39, they came from 48 states, and an ethnic background of 30 countries. This may surprise many people. Forty one percent (41%) of the 1,123 new soldiers on the field, that day, had at least an Associates Degree, thirty nine percent (39%) had bachelor’s degrees, and six percent (6%) had masters degrees.

Haley is now at Fort Benning, Georgia, where in three weeks she will make five parachute jumps, two with combat equipment, one of them at night and become a US Army Paratrooper. Then, on to Fort Lee, Virginia where she will learn how to pack all kinds of parachutes, and rig heavy drops from pallets to small tanks, becoming a parachute rigger. HOOAH!!!!