The Army is trying to produce better trained soldiers in their initial training. Infantry training has increased from 14 weeks, including basic training to 22 weeks, including basic training. Armor and Combat Engineers are expected to follow. However, many Army schools will continue to only familiarize new soldiers with most elements of a job, because the positions in which the soldiers may find themselves, are so varied and the required knowledge so vast it would not be cost effective to keep an individual in training that long.
The Quartermaster Corps is one of those areas. There are nine different MOS’s (Military Occupational Specialty) in that corps, seven are very specific and they do learn most of the required skills in AIT (Advanced Individual Training). They are 92F Petroleum Supply Specialist – they store and transport petroleum, 92L Petroleum Laboratory Specialist – the lab workers who test fuel, 92G Culinary Specialist – cooks, 92M Mortuary Affairs Specialist, 92R Parachute Rigger – pack parachutes, 92S Shower/Laundry and Clothing Repair Specialist, and 92W Water Treatment Specialist. However, the other two, 92A Automated Logistical Specialist, and 92Y Unit Supply Specialist only scratch the surface of knowledge required in those two areas, especially MOS 92Y Unit Supply Specialist.
MOS 92Y Unit Supply Specialist is the basic corps job in army logistics, which is the Army’s life blood to keep operating. Every type of company in the Army, whether infantry, medical, administrative, whatever, has a 92Y Company Supply sergeant and an assistant. Every battalion has a logistics section (S4 Section), with a higher ranking 92Y Supply Sergeant. Every Brigade has an S4 Section with a Master Sergeant E8 92Y Supply Sergeant, and every division has a G4 Section with a Sergeant Major E9 Supply Sergeant. 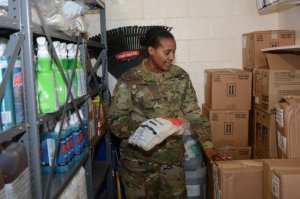 MOS 92A Automated Logistical Specialist is more of a computerized warehouse soldier. At the lower level they unpack, and store supplies and enter items into a data base and issue the supplies to units. They are assigned to company level in some units to maintain stock records and other documents such as inventory, materiel control, accounting and supply reports. They also maintain warehouses in forward support companies.
The 92A is oriented toward maintaining stores of supplies, whereas the 92Y deals with individual soldiers in issuing material and maintaining accurate property accountability.

92A’s working in a warehouse.

Their AIT course subjects, both at the Quartermaster School at Fort Lee, Virginia, reveal the differences in jobs. In AIT, the 92Y gets 111 hours of Basic Supply Principles, while the 92A only gets 16.5 hours in basic supply. The 92Y gets 79 hours on the Army Global Combat Support System (GCSS – Army). The 92A gets 163.5 hours on Warehouse Operations, which includes instruction on GCSS – Army. The 92A gets 26 hours on Food Subsistence because they are involved in the transportation, storing, and issuing of rations. The 92Y gets 80 hours on Small Arms Maintenance Procedures. That does not include weapons maintenance, but the proper maintaining of a unit arms room. In 21 years, I never saw a 92Y working as a company armorer. Every army post has an armorer school, where someone else is trained to be the company armorer. A school trained 92Y is too valuable to put in the arms room, he or she becomes the assistant to the Supply Sergeant. However, the Company Supply Sergeant is also responsible for weapons accountability, so he or she must have that knowledge. AIT for 92A is 9 weeks 2 days, 92Y is 8 weeks 2 days. Both MOS’s require an ASVAB clerical (CL) score of 90, which consists of word knowledge, paragraph comprehension, arithmetic reasoning, and mathematics knowledge.
AIT at Fort Lee, Virginia is not like basic training. There are drill sergeants, but some AIT trainees have described it as, like college in uniform. Three people to a room, wake up is usually 05:00 (5 AM), PT (physical training), eat breakfast, clean your room, fall in formation at 08:30 for class. Lunch is 12 to 1 PM (13:00), then back in class until 17:00 (5 PM). AIT trainees are off until 21:30 (9:30 PM) bed check, they can use their phone, computer, pad, etc, and can normally go anywhere on post. Off post passes are sometimes granted toward the end of AIT.
Assignment locations for these jobs are practically unlimited, especially for 92Y, which is in every company (a unit of 100 to 200 soldiers) in the army. If you want to be assigned close to home, which I do not recommend, the closest posts are Forts Leonard Wood, Leavenworth and Riley, Kansas, Knox and Campbell, Kentucky. Fort Campbell has the most positions, Riley second, then Leavenworth, Knox and Leonard Wood probably have about the same. I don’t recommend being assigned close to home because it is a different life and being too close to home can be a distraction from doing your job well. If you think that you would be terribly home sick, don’t join the army.

The 92A is basically a warehouse soldier, dealing with material. Bringing it in, accounting for it, and sending it out. The 92Y deals with supply for individuals and units. Everyone in a company wants to be friends with the supply people, because they have things. The supply specialist has to make sure that their unit has everything it is supposed to have, and that they have a receipt for everything that is issued. Supply regulations are voluminous and the study and learning is continuous. Many enlisted supply people switch to warrant officer, which is a logistics technician, around mid-career.

Automated Logistical Specialist 92A stocking and entering data in a warehouse.

92A soldiers can get several national civilian certifications in warehouse and supply chain management and inventory control. 92Y soldiers can get some of the same certifications, plus logistics technician and supply management.
Life as a 92Y Private and Specialist can, at times, feel more like labor, because those are the ranks issuing equipment, getting signatures for that equipment, and entering the transactions into a computer, but after promotion to Sergeant life changes from worker-bee to supervisor. Then, those couple of years in the trenches begins to payoff, because of the knowledge gained at the bottom level. Promotion to Sergeant is currently fairly fast for 92Y’s, a little slower for 92A’s. Very good Unit Supply Specialists are currently being promoted to Sergeant in 2 to 3 years, and promotion to Staff Sergeant is faster than many other support MOS’s, because most of the company supply sergeant positions call for a Staff Sergeant. “Very good” means someone who has studied and learned the supply regulations and procedures, and has a solid grasp of the operations of his or her company. The supply sergeant is a highly respected position in the Army.
The Enlisted Quartermaster Branch at the Human Resource Command is, in my opinion, one of the best enlisted branches. On facebook, they are always posting upcoming positions that are going to be available worldwide, in case someone wants those jobs, before they have to start selecting people to fill them. When they do select someone to move to another assignment, there is a lot of communication with the individual before actual orders are issued.
In summary, 92Y’s are where the supply rubber meets the road, 92A’s work in the warehouse.