Why is the 82nd Airborne Division called the All American Division, and why is it called America’s Guard of Honor?

Paratroopers in the air.

ALL AMERICANS;
In 1914, when war exploded in Europe, President Woodrow Wilson proclaimed the United States would be neutral, and history says that the majority of the American people agreed. In 1915 Germany announced unrestricted warfare against any ship headed for England. Ships with Americans on board were blown up with mines and torpedoed by German submarines. In March 1917 Germany sank four United States Merchant ships. On April 2nd President Wilson called for a declaration of war against Germany. It was approved by congress on April 4th.
The Selective Service Act of 1917 or the “Draft Act”, was approved and signed into law on May 18th. By the end of the war about 4.2 million men had been drafted into the service. During the summer of 1917, hundreds of thousands of men were drafted into the Army forming new divisions and training as units. A total of 62 divisions were formed and 42 were shipped overseas.
The 82nd Infantry Division was constituted in the National Army on August 5th 1917, and filled with all drafted soldiers directly from civilian life to go through training as a unit, and activated on August 25th, at Camp Gordon, Georgia. Initially a contest was held in Atlanta to choose a nickname for the division, but when it was discovered that there were soldiers from all 48 states in the division, the Division Commander, Major General Eban Smith, chose the name “All American”, and the AA shoulder patch was created. The 82nd Infantry Division spent more consecutive days on the front lines in France than any other American Division and suffered 7,422 casualties, including 1,298 killed. Its’ battle streamers included Lorraine, Saint-Mihiel, and Meuse-Argonne. One of its’ soldiers was the most famous Medal of Honor winner of World War One, Alvin C. York. The 82nd Division returned to the States in April and May 1919, and was deactivated at Camp Mills, New York on May 27th.

AMERICA’S GUARD OF HONOR:
Following the surrender of Germany, the 82nd was ordered to Berlin for occupation duty. In Berlin General George Patton was so impressed with the 82nd’s honor guard he said, “In all my years in the Army and all the honor guards I have ever seen, the 82nd’s honor guard is undoubtedly the best.” Hence the “All-Americans” became known as “America’s Guard of Honor.”
That’s the short answer, but there is always more to the story. What else, besides sharp looking paratroopers was in General George (old blood and guts) Patton’s mind when he said that? 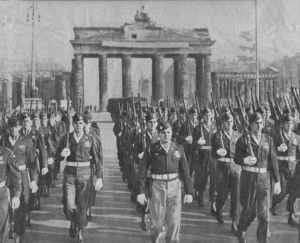 General Patton knew and respected the 82nd Airborne Division, and he knew and respected its commander, Major General James Maurice Gavin, the youngest division commander, in fact the youngest general in the Army, at age 37. Clay Blair wrote in “Ridgeway’s Paratroopers”; “Gavin was tall and slim (Slim Jim), handsome, soft-spoken, a dedicated athlete and a master in the art of leading men. He was also dazzlingly brilliant – considered by some to be a military genius. In conversation, his mind raced at breathtaking speed over such a vast canvas. Ridgeway later wrote that Gavin was “one of the finest battle leaders and one of the most brilliant thinkers the Army ever produced.”
General Patton may have thought back to his first meeting with the 82nd Airborne Division, when he was commanding the 7th Army during the invasion of Sicily in July 1943. Two Infantry Divisions were to land on the beaches, led the night before by an 82nd Airborne Division reinforced regiment parachuting inland, in front of the invasion forces, to block the German army from reaching the beaches. He may have remembered how high winds blew the 82nd’s planes wildly off course, with most becoming lost and dropping paratroops scattered over an area almost 100 miles wide, instead of in front of the invasion forces. How paratroopers formed together in little groups, cut every telephone line, attacked German convoys and road blocks. How then Colonel Gavin, carrying an M-1 rifle and leading an engineer platoon, then a battalion attacked Biazza Ridge, with small arms, bazookas, and small modified artillery pieces, against German tanks. He may have seen Gavin frantically digging a body sized hole, with his helmet, to keep from being crushed by the tanks, but he would have definitely remembered Gavin and his ad hoc band of paratroopers stopping the German armored column at Biazzza Ridge. James Gavin recalled meeting General Patton, after the Biazza Ridge battle. General Patton’s first words were; “Gavin you look like you could use a drink. Here have one”, and handed him a flask. In spite of starting in complete disaster, the 82nd accomplished all its objectives.
General Patton may have remembered how the 82nd Airborne Division was assigned, what some called, the suicide mission of blocking several German Armored Divisions from reaching the Normandy beaches on D-Day, and again being scattered over the area, but accomplishing every objective and stopping the German armor. He may have also thought about Operation Market Garden in Holland, where the 82nd accomplished all its objectives, only to be stopped by a superior German force at the Nijmegan bridge over the ¼ mile wide Waal river. Then sending a battalion across the river, in boats, against German infantry on the far bank, over running the Germans and taking the bridge. Then spending the next two months fighting the German army on the ground, in Holland. The Battle of the Bulge must surely have been on General Patton’s mind, when he was given the mission of stopping the German breakout in December 1944, and the 82nd Airborne Division hurriedly thrown into the battle, succeeded in stopping the main German column. General Patton may or may not have known exact figures, at that time, but he knew what divisions did what in the war. There were 73 American divisions engaged in combat during World War II. The 82nd Airborne Division spent 422 days engaged in active combat, number four out of the 73, and “never lost a foot of ground”.
Early on Thursday morning, August 30th 1945, Major General Gavin wrote a letter to his daughter, Barbara. He wrote that in about an hour he was having General Eisenhower and the Senate Foreign Relations Committee as guests for an airborne division review. So, in the airborne tradition of never doing anything half way, an honor guard was organized of all combat veterans, with several rows of ribbons, all six feet tall, with spit shined jump boots, with white laces, white parachute silk scarfs around their neck, and chrome plated bayonets on their rifles.
When General Patton uttered those words, that morning, the stands were filled with news reporters, who put the General’s words on wire services around the world, and that is when the 82nd Airborne Division became America’s Guard of Honor.
The 82nd returned to the United States and led the World War II Victory Parade through New York City on January 12th 1946, before finally returning to Fort Bragg, North Carolina.

Since World War II, the 82nd Airborne Division has been the United States Military immediate reaction force. Presidents Truman and Eisenhower chose not to use the 82nd in Korea, but to keep it ready if needed elsewhere. The 82nd is now the US military Global Response Force, and how it has responded.

The new All American Chapel. 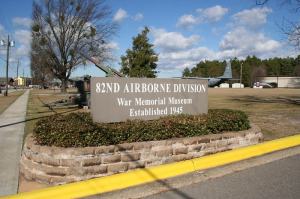 Today the 82nd Airborne Division Headquarters is located in Gavin Hall. Slim Jim Gavin set the standard for airborne officer leadership. When saluting a superior officer in the 82nd, the proper greeting is a boisterous “All the Way, Sir” (or Ma am). The officer answers with a smile and a hearty “Airborne”.

I spoke at our local high school veterans day assembly and found that very few people, especially young people, out here in the country know anything about the military. So, in January 2017 I started a column in our local weekly paper, titled "Life in the Army", in an attempt to educate people about normal life in the military. I retired from the army, as a master sergeant, in 1984. I spent a total of about 10 years in the 82nd Airborne Division, two tours in Vietnam, one with the 101st Airborne Division, one split between USARV, HQ and the 5th Special Forces Group. I was in the infantry, and in administration. I was a Drill Sergeant for two years, and three years of ROTC duty. I have tried to keep up ever since. View all posts by John Stockton